Everything You Need To Know About The Legendary Nathan AirChime Train Horns! 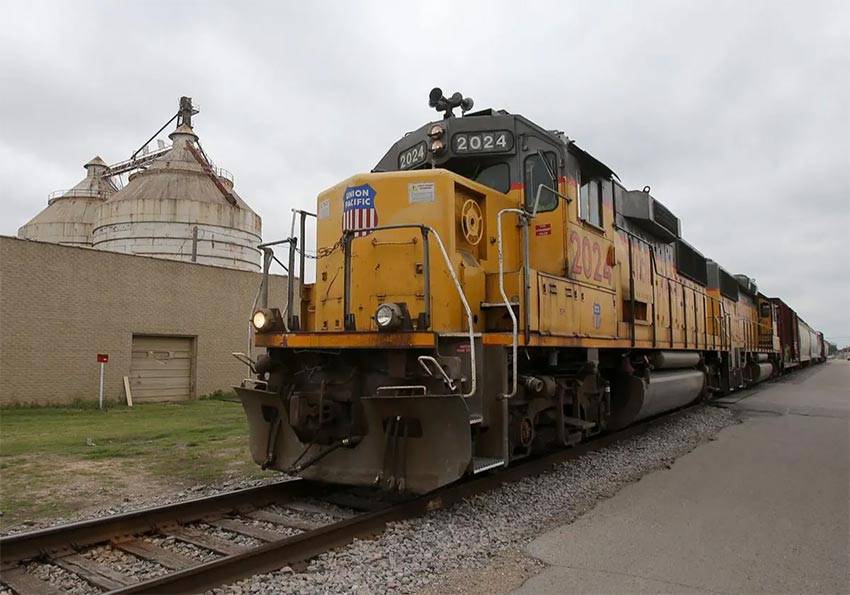 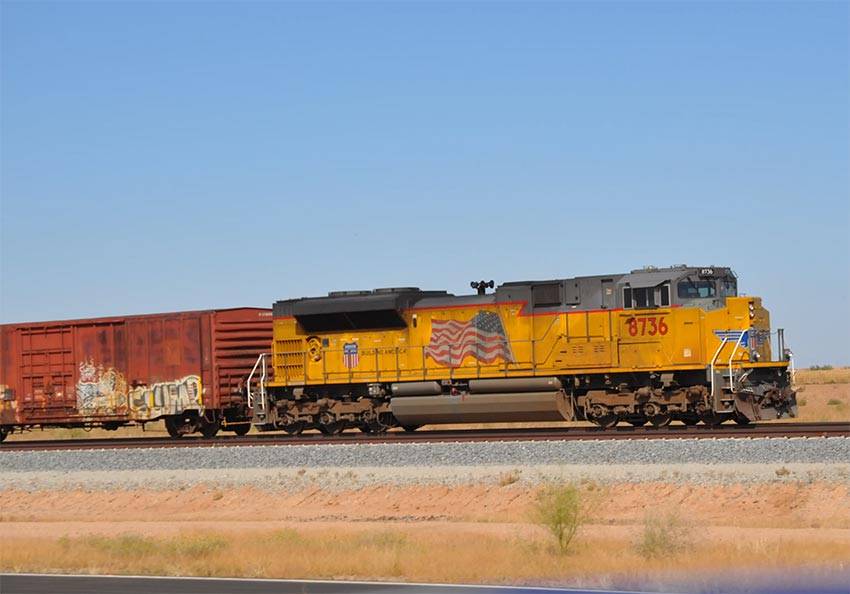 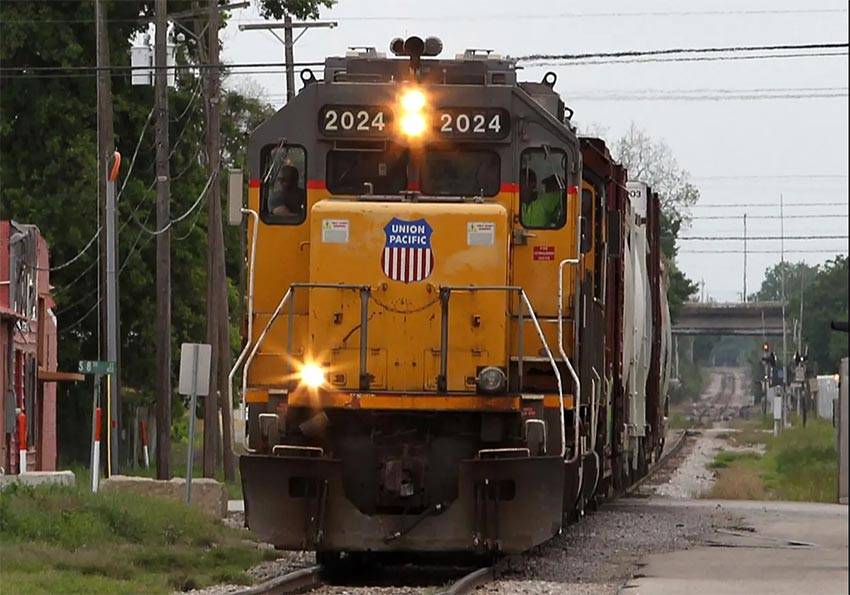 “What Is Your Loudest Train Horn?”

Hands down, the most asked question we get. You know when you get a HornBlasters Train Horn Kit, you are getting the loudest horns you can buy, but who is the top dog out of them all? We actually answered this question back in 2014 when we had our most popular horns 3rd party tested:

As you can see, the numbers don’t lie. The Nathan K5LA beat out any other horn, both at close range and 100 meters away. Quite a few of our horns come close (our Shocker Train Horns are only 1.7 dB off), but nothing has been able to beat the Nathans Airchime Train Horns. 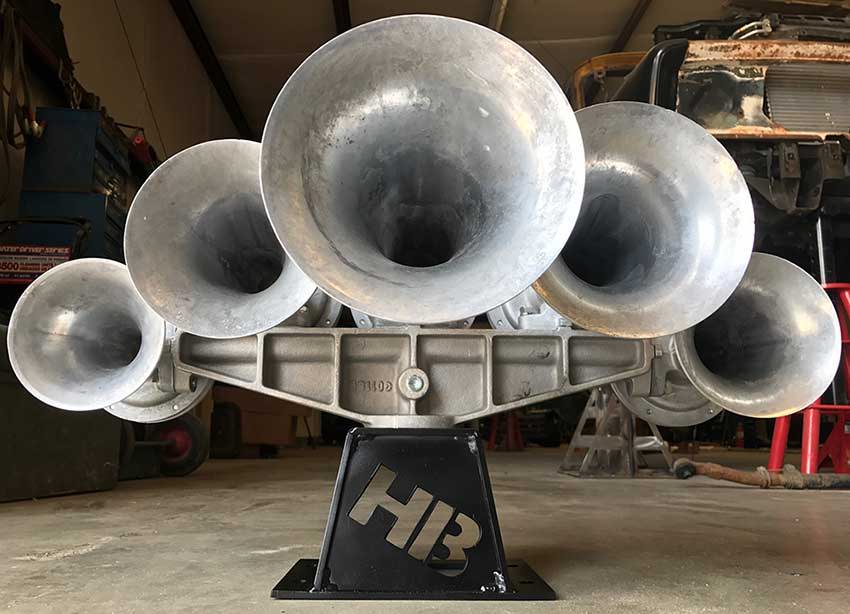 A Horn with History

Nathan Airchime Train Horns were designed and manufactured to last for decades on trains that are constantly out in the elements all over North America. That means they are trusted to work each and every time, night and day, rain or shine. If you are making the investment into a train horn kit, why buy anything else than a household name horn that has been constantly tried and tested for the past sixty-six years?

That’s right, we said sixty-six years. Nathan AirChime Train Horns have been ruling the rails for longer than most of us have been alive. In 1953, Canadian manufacturer Airchime Ltd refined its Nathan Truck Horn to be used on locomotives. The end result was the very first P-style Train Horns, also known as “The President’s Whistle”. The Nathan AirChime P-Horn took the rails by storm with its incredible volume, lower manufacturing cost, and little-to-no maintenance. The P-Horn has gone through many different changes over the years, with the three-chime P3 and the five-chime P5 being the most commonly seen today. 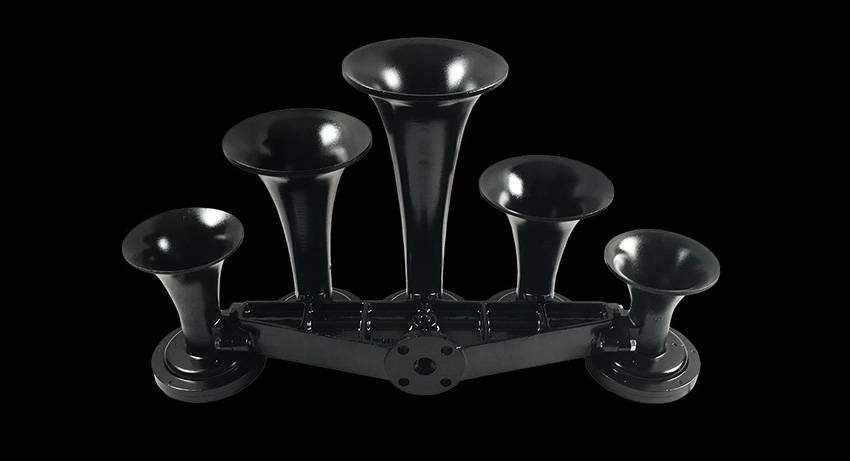 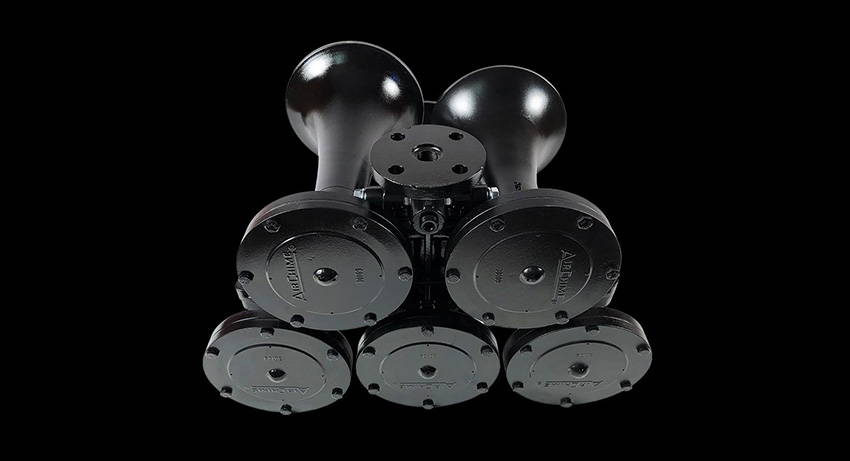 For any horn, but especially train horns, the sound of the horn is going to be determined by the quality of materials and the craftsmanship in the manufacturing process. The manufacturing process for both the K-Horns and the P-Horns affect how they sound immensely. The Nathan AirChime P3 and P5 train Horns are made with a sand-casting process. The sand-casting process is what is responsible for the P-Horn’s classic mellow tone.

As mentioned before, the current Nathan AirChime K5 Horns come in two options: The K5LA and the K5HA. The K5LA is the most popular version that we sell. With its much lower profile than the K5HA, its a great match for train horn kits for vehicles, as it tends to be easier to install. While the manifolds do affect how the horns look, they do not affect the sound and it really comes down to personal preference on which on to get. 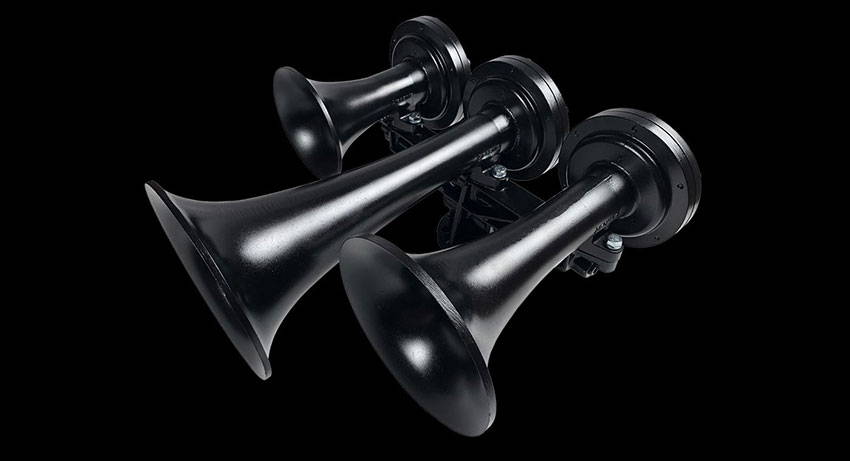 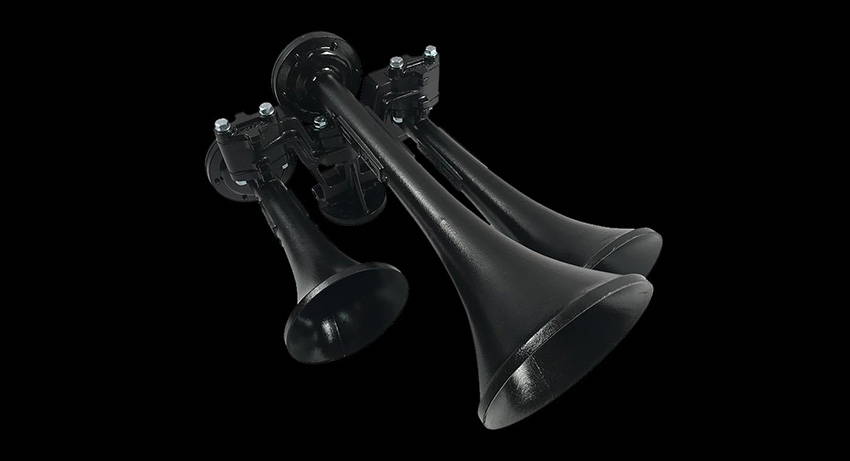 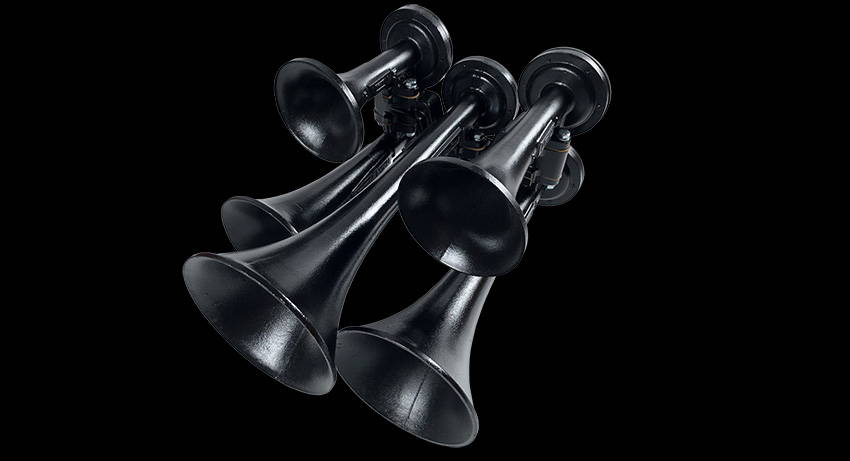 For massive train horns such as the Nathan AirChimes, you can’t just hook them up to just any onboard air system. These beasts go through much more air than any other type of horn and even other train horns, but that is the price you pay for the loudest horns available! To get the most out of your Nathan AirChime Train Horns, you are going to need at least a 5-gallon tank with a compressor that is powerful enough to maintain 150 PSI in that tank.

Luckily, we did all the research to bring you a few pre-made kits that are optimized to be used with the Nathan Airchimes. With these kits, we take all the guesswork out of it, giving you everything you need to get up and going.

Starting out the list with the best of the best, the Nathan AirChime K5LA 5485K Nightmare Edition Train Horn Kit is absolutely the best pre-made train horn kit that we sell. In addition to the monstrous K5LA Train Horns, this features Viair’s latest and greatest air compressor, the Viair 485C Stealth Black Air Compressor. This kit can run up to 200 PSI with a constant duty cycle, meaning in addition to running train horns, you can support tire inflation, air tools and pretty much any other task you would need mobile air for. With a kit this size, you can get a solid 5 seconds of continuous blast time out of your Nathan Airchimes.

Quicker and more compact than the Nathan AirChime K5LA 5485K Nightmare Edition Train Horn Kit, the Nathan AirChime K3 540 Train Horn Kit is the go-to kit for customers that want a system mainly just for the horns. The Nathan Airchime K3 Horn that comes with this kit has a much smaller install footprint than the K5LA, making it much easier to fit on vehicles with limited space. The Viar 400C at the heart of this system is one of the fastest compressors we carry, recharging the tank from 110-150 PSI in just over a minute and a half.

Quicker and more compact than the Nathan AirChime K5LA 5485K Nightmare Edition Train Horn Kit, the Nathan AirChime K3 540 Train Horn Kit is the go-to kit for customers that want a system mainly just for the horns. The Nathan Airchime K3 Horn that comes with this kit has a much smaller install footprint than the K5LA, making it much easier to fit on vehicles with limited space. The Viar 400C at the heart of this system is one of the fastest compressors we carry, recharging the tank from 110-150 PSI in just over a minute and a half.

Looking for that classic train horn sound that you hear in old Western movies? With our Nathan AirChime P5 540 Train Horn Kit, you get the smooth mellow and low tone that only the 5-chime Nathan AirChime P5 can deliver. Conductor hat not included, but our fast fill Horn Air 540 Onboard Air System is!

These kits are also available for the P-Series Train Horns as well. While these pre-made kits are an easy way to get going, you don't have to stop there! We have seen customers set up their Nathans with insane onboard air systems. At our first-ever Train Horn Competition at Daytona Truck Week this year, Jake Dudley (@jdudley_113) took home 1st place with a jaw-dropping minute-long blast coming out of THREE different Nathan AirChime Train Horns (K5LLA, K5H & a P5A) with a 50-gallon tank! Your train horn set-up is only limited by your imagination. 5-gallon to 50-gallon, single compressors or ten, the sky is the limit! 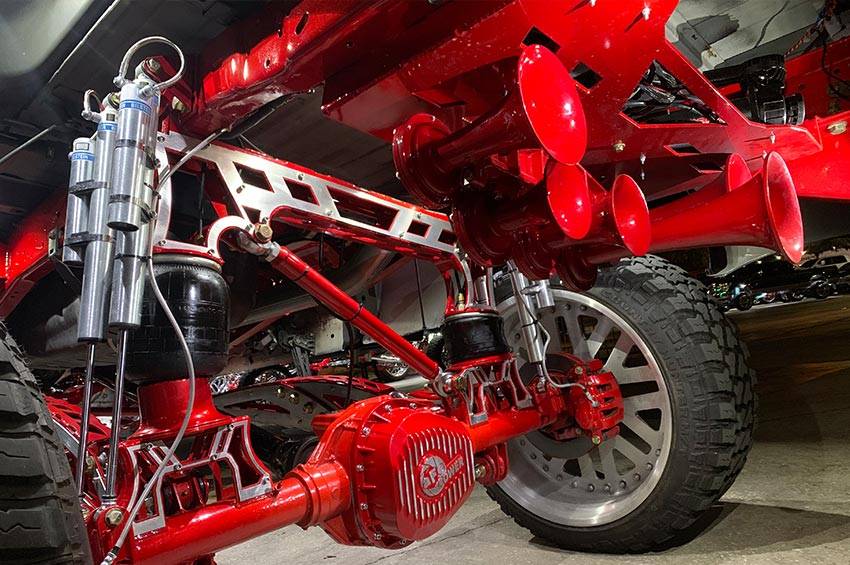 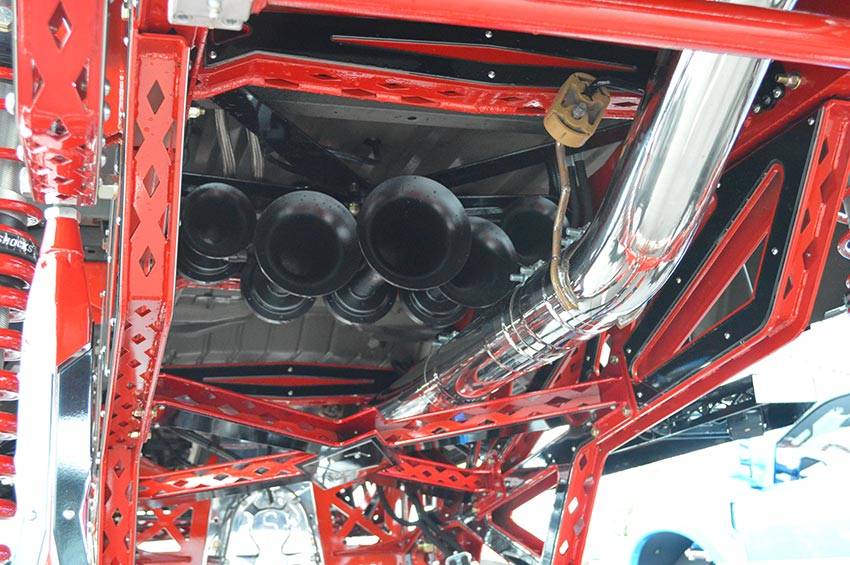 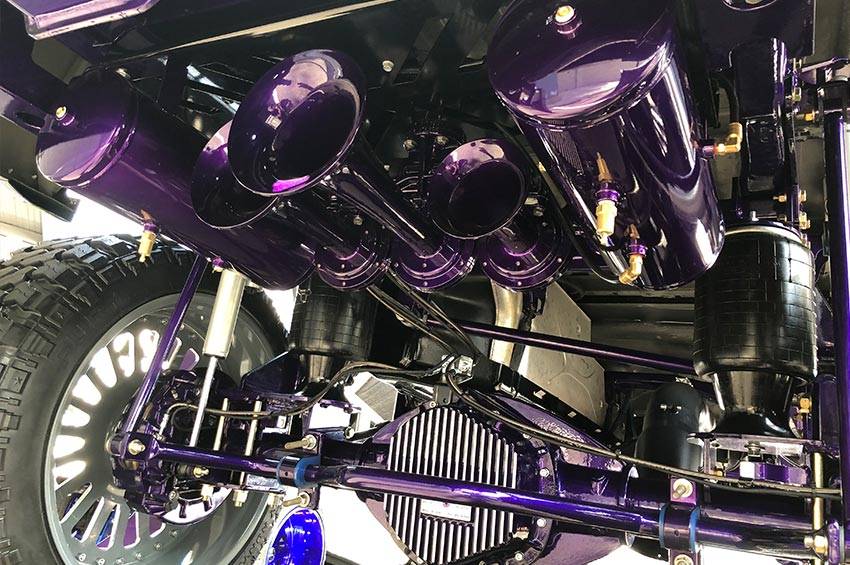