The 100W PA system is a great way to have fun with your friends, and make some noise on the road. The PA can be wired so that it operates when the vehicle is on or off, or only when it is on. This brief guide will go over the steps needed to properly wire and install your PA.

Start by locating the wiring harness that was packaged along with the mounting hardware and mini blade fuses. This harness has 6 wires that come out of the plug. The harness has a plug on the end that connects to the PA. The layout of this plug is pictured below. 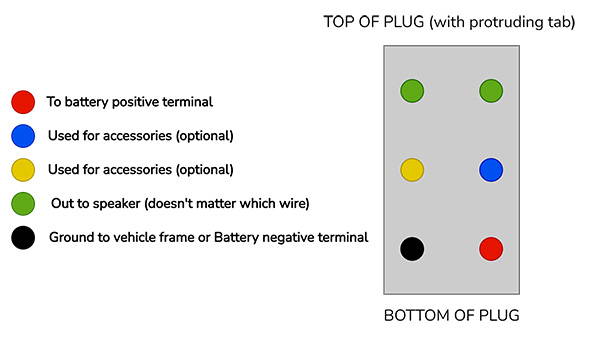 The two green wires that come off the harness are used as outputs for our speaker. It will not matter which side is +/- as we are only using one speaker. If you were using two, you would have to wire +/- per speaker so that they remain in phase with each other. With ours, it will not matter. Connect the two brown leads to the brown & blue leads coming off the speaker assembly.

Can be routed to the frame of the vehicle to serve as a ground for the unit or directly to the negative terminal on the battery.

The yellow and blue wires on the PA are used for accessories, such as a lightbar or other 12v accessory. If your accessory pulls more than 5A of current, we recommend you run a relay in between the toggle and the accessory. We recommend connecting these leads to pin 86 (trigger side) of the relay you decide to use.

Take the plug on the end of the wiring harness and connect it into the plug on the back of the PA. With everything connected, you can now turn the volume knob up to turn the unit on. Select the desired sound from the selector knob in the middle, and start making noise.